Paimpol and the Bréhat Archipelago 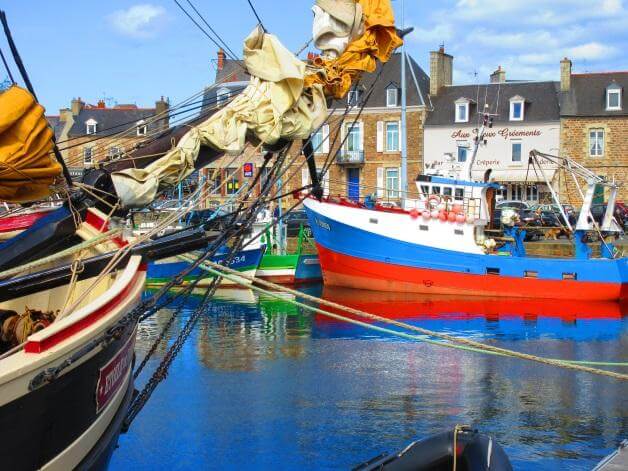 A legendary port with a scattering of islands nearby, and a spectacular Abbey

This harbour was home to legendary fishermen from Iceland who, in the 19th century, fished for cod as the Portuguese had done before them. Little remains from this time, other than what might be buried in the depths among long-lost schooners. Today, this site is famous for its Sea-Shanty Festival held every other year, when the port appears once more in its colourful youth, thanks to the traditional tall-ships and sailors who come from all over to sing its praises.

This stone-built town includes some remaining timber structures, plenty of lively alleyways and a lovely Tuesday-morning market that is popular in summer.

Head to Bréhat ferry-port and you’ll discover Porz Even, a true taste of fishing and its associated trades. All the local Paimpolais people come here for their lobster. A visit to the Widow’s Cross (la croix de veuve) offers a panoramic view across the surrounding islands that will take your breath away. It’s a viewpoint of unspeakable beauty.

From this viewpoint you can also look over Launay Bay, also known as ‘Scholars’ Bay’ (La Baie des savants) or ‘Sorbonne Beach’, referring to its history of progressive intellectuals, scholars and literary types, four of whom were awarded a Nobel prize. From 1898, a group of professors from the great Paris Sorbonne, settled here for their holidays at l’Arcouest facing Île de Bréhat. They shared political views, secular beliefs and the values of pacifism.

Facing the coastal point of l’Arcouest: Bréhat Archipelago. A maze of islands, currents and beacons, Bréhat Archipelago is a wonderful playground for those who love zipping between the rocks – and here, the kayak is king. Cormorants and lobsters make their homes east of the island, with seabass and sand-eels to the west.

Even at high tide, 96 islands and islets are visible, each sheltering lobsters and shrimp. This legendary bay, sprinkled with islands and sometimes compared to Ha Long Bay in Vietnam, includes Île Bréhat – its largest island, known as the isle of flowers, as it is planted with tropical plants and protected by a filigree of pink rocks.

Here, you can discover little houses built from pink granite tucked among the camelias and hydrangeas, you can meander along the trails between moorlands and heathers, and unwind in tiny little peaceful creeks. The south of the island feels lush and Mediterranean while the north faces the sea with landscapes reminiscent of Ireland.

From L’Arcouest coastal point, you can reach this island of flowers via a 15-minute boat trip, perfect for a day trip.

Here, there are no cars, only push-bikes, which you can hire on-site if you wish.

The south of the island is like a Mediterranean garden that captivates you with its sweet perfume. To the north, it’s the fresh sea air that will fill your senses.

Before completing your day, stroll along the GR34 coastal path towards the Abbaye de Beauport. In an exceptional marine setting, this maritime abbey spans eight centuries of history in a noteworthy site of protected natural coastline covering 100 hectares, belonging to the French Coastal Conservation.

It was founded in 1202 with the help of Alain I of Avaugour, Count of Penthièvre and of Goëlo. He called upon the community of Premonstratensian Canons based in the Abbaye de la Sainte-Trinité of Lucerne in the Diocese of Avranches, Normandy. The Premonstratensian had been founded in around 1120 by Norbert de Xanten, Bishop of Magdebourg, and one century later it included around 600 sites spread from Ireland to Cyprus, and from Sweden to Italy. A general Abbot ruled with a firm hand over what had become a multinational concern and one of the missions set by its founded – Saint Norbert – was to serve the parishes.

On its walls you can see scallop shells, reminding us that this place was part of the pilgrim trail, Camino de Santiago: Santiago is also known as Saint-Jacques de Compostelle, and ‘Saint-Jacques’ is the French name for scallops.

Heritage fans will also love the shows and singing tales sometimes organised within these ancient walls.

This is a beautiful coastal location, from which you can see Île St Riom, where the monks set up their first abbey before migrating to the mainland.