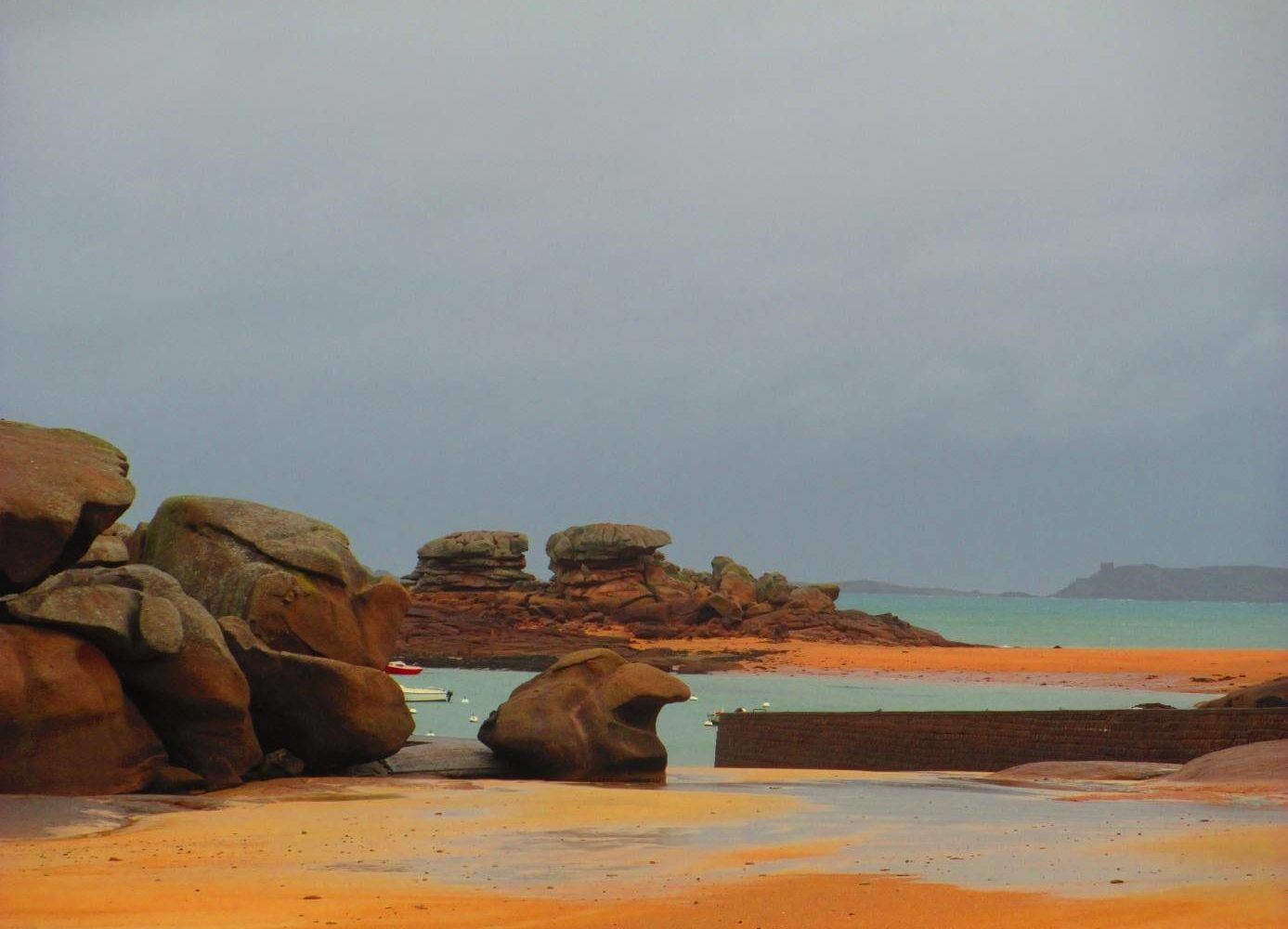 A dazzling array of colours and shapes

These shores are like no other, a coastline filled with astonishing rock formations in the region’s famous rose tint. The Pink Granite Coast is one of those places that seems to have been created by giants from another world. The little port of Ploumanac’h (voted France’s favourite village in 2015) is the jewel in the crown where the stone Oratory of Saint Guirec seems to float at high tide, and the island Château de Costaérès surveys from a distance. It’s an other-worldly setting, taking visitors through magnificent landscapes.

The rose tint of the stones, the green of the pines and the grey of the slates create a harmonious symphony between Perros-Guirec and Trébeurden. These colours are perfectly contrasted by the ever-present blue of the sea. At any time of the day or year, the pink granite offers a captivating sight for locals and passers-by alike.

Here the beauty of a wild, untamed and windswept Brittany has led to the creation of these strange marvels of nature. There are strings of rocks that glow in the sunset, creating a glorious spectacle against the white-sand beaches. On the coastal paths, you’ll see where artist Maurice Denis captured the brightly-coloured bathers of his paintings.

Offshore, between Perros Guirec and Trébeurden sits the kingdom of the seabirds, stretching for nearly 100 acres.

It’s the northernmost area of Brittany, one of France’s top spots for seabirds including northern gannets and the last population of Atlantic puffin to be found in the country. There are even some grey seals.

For half a day or longer, you can take a boat here from Perros Guirec. Remember to bring your binoculars to see the gannets, puffins, guillemots, European shag, razorbills, black-legged kittiwakes, and gulls – lesser black-backed, greater black-backed or herring gulls.

A protected site since 2012, the seven islands of Rouzic, Costans, Malban, Bono, Île aux Moines, Île Plate and Cerfs carry you to a magical world of bird-ballet and feathered soloists. On the Île aux Moines there is also a lighthouse as an added backdrop.

The Renote Peninsula on Trégastel leads you seaward for 2km between the ferns and moorland and the chaos of pink rocks.

The poetic landscapes continue with secret places such as the Quellen marshlands behind the beach of Goaz Tiez, a space between damp shadows and flamboyant greenery, with a soundtrack of birdsong, frogs and silence. A little further on, there’s Traouïeros Valley near a tidal mill where the small port of Ploumanarc’h sits in the background as if posing for a picture.

This is a land sprinkled with traces of an ancient past, prehistoric gallery graves and standing stones that will set you dreaming as you explore the Pink Granite Coast.